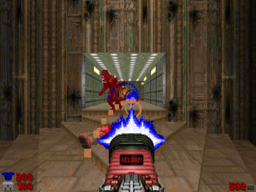 The player fends off a Blood Imp with the Auto-Railgun.

OMG Weapons! (and Monsters) (or OMGWPNS) is a gameplay mod that replaces weapons and monsters. Released by Dean "deathz0r" Joseph in July 2005, it was one of the first mods uploaded to the idgames archive that included DECORATE code, and thus required the ZDoom Community Build or GZDoom to play at the time. (ZDoom 2.1.0, which added the necessary DECORATE support, had not yet been released.)

OMGWPNS features 20 extra weapons and 43 new monsters. All of them are heavily based off the originals, with most changing attacks and/or sizes, and all being recolorations (with the majority being by palette translation). They are weaved into the game by random spawners, which replace the original weapon/monster types. At each spawner, either the original or a modified version of the weapon or monster will be placed there. For example, where a chaingun may originally be located in a map will be replaced by a Chaingun Spawner. At the start of each map, it may just spawn the chaingun again, or another weapon based off it like the Minigun or Streetcleaner. The same goes for monsters, but with their types.

In 2015, deathz0r released a tenth anniversary edition of the mod (version 5), featuring a number of new changes, including a few new monsters and weapons. Notable changes include making the Fast Fists and Laser Pistol as default weapons, with the Fast Fists replacing the default fist, as well as the removal of certain weapons and monsters. Some existing weapons got cosmetic changes, and some existing monsters got new attacks. Additionally, the mod can be loaded using the Eternity Engine with support for all but three monsters, but with no weapons support.

There are a total of 24 extra weapons in OMGWPNS:

There are a total of 62 extra monsters in OMGWPNS: