Object "32" is a single-level PWAD for Doom II, meant for limit-removing ports that was released on December 13, 2008 by Lainos. It uses a music track from Gears of War.

A difficult and dark techbase overtaken and altered by the forces of Hell, Object "32" was originally meant to be part of the Grid 32 community project, but ended up being released standalone. It is the first part in a series of maps created by Lainos, which was continued in Da Will's MAP10: Object "33" in 2009, and Object "34": Sonar in 2011. 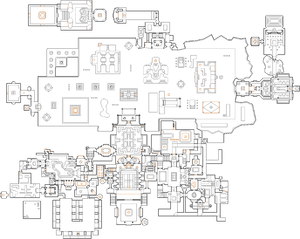 Map of Object "32"
Letters in italics refer to marked spots on the map. Sector numbers in boldface are secrets which count toward the end-of-level tally.

* The vertex count without the effect of node building is 5849.