Object "34": Sonar is a single-level PWAD for Doom II, meant for limit-removing ports that was released on December 31, 2011 by Lainos. Set in a massive underwater station amid a communications blackout, Object "34" is the last entry in a series of maps created by Lainos, which began with Object "32" in 2008 and continued in Da Will's MAP10: Object "33" in 2009.

The mod comes with a series of sprite replacements, including a fish that replaces the Wolfenstein SS and swims in indestructible tanks. Most notably, Commander Keen has been replaced by the Vortex Queen from the Ecco the Dolphin series. 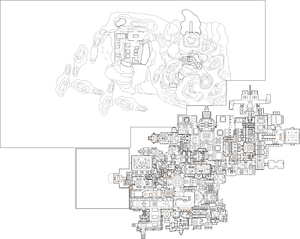 Map of Object "34": Sonar
Letters in italics refer to marked spots on the map. Sector, thing, and linedef numbers in boldface are secrets which count toward the end-of-level tally.

* The vertex count without the effect of node building is 27888.