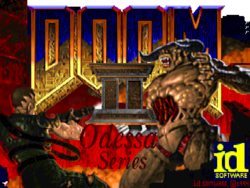 Title screen of the Odessa series 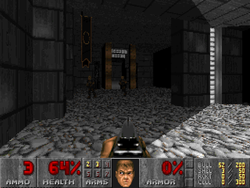 Screenshot from Odessa 3 ("Fade to Gray").

The Odessa series is a series of Doom II levels created by Bob Evans. The levels are notable for a unique puzzle-oriented gameplay and one of the levels (Odessa 14) was listed in Doomworld's Top 100 WADs of All Time.

Most of the levels in the Odessa series were for a long time not publicly available: they were originally distributed on the Compuserve Action Games forum, with distribution terms that stipulated that they could not be distributed anywhere else. When the Compuserve forum died, it was technically impossible to legally host these levels anywhere, including the idgames archive. However, in late 2013, Bob Evans appeared on Doomworld and subsequently submitted the missing levels to the archive.

Several of the levels in the series (4, 5, 8 & 10) appear to have never been released and Bob Evans, the author of the series, has stated that these were scrapped. The text files attached to several of the WADs state that the individual levels were intended to be part of a 17-level megawad named "LORDDOOM.WAD", but this was also never completed.