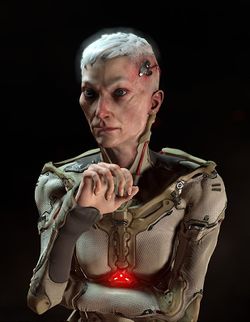 Dr. Olivia Pierce is a high-ranking adherent and researcher in the UAC, with the official title of Head of Biomechanical Research. She has taken practical control of the UAC Mars Base by causing a Hell Wave of Argent energy while releasing all of the captive demons in the Lazarus Labs, killing 64% of the staff and zombifying the rest. She is a major antagonist of Doom (2016), with characteristics similar to Malcolm Betruger of the Doom 3 series and Dr. Guerard of the Doom RPG storyline. She opposes Samuel Hayden, whose claimed interests are only in Hell's Argent energy, by trying to bargain with the demons and open a permanent portal to Hell.

Olivia was formerly an ordinary woman, as demonstrated by a picture of her prior appearance which can be found in the Advanced Research Complex on an array of monitors displaying high-ranking UAC researchers. Sponsored by Samuel, she obtained an honors degree in Biomechanics and Genetics in Strasbourg and was appointed to the Global Science Council on Earth. She was a founder of NanoStruct Aerospace & Defense Systems, where she made a fortune. She also spent a brief time as a missionary in South America, but found the experience unfulfilling. She initially rejected Samuel's offers to join the UAC, believing she had no place in the energy industry, but after being sent an artifact from the Argent Fracture on Mars, she became obsessed with the prospect.

Her long-term exposure to Hell as part of her research deteriorated her physical body as it had Samuel's, causing her to develop debilitating scoliosis. In an attempt to remedy this and maintain mobility, she had herself integrated into an artificial titanium exoskeleton. While this worked, the exoskeleton keeps her in a constant state of pain and torment, which, in her ever-increasing fanatic dedication to Hell studies, she refuses to remedy through medication, lest her mind be dulled in any way. 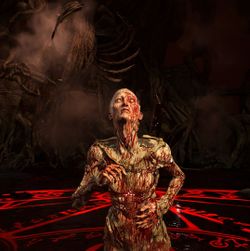 At some unspecified point, Olivia turned completely from merely researching Argent energy and the history of Hell due to the intervention of the Hell priest Deag Ranak, and instead bargained with the demons' overlord, the Nameless One, in hope of relief from her torment. The demons' prophecies stated that one like her would appear and help them open a new portal from which to conquer additional worlds, and so a deal was struck to open a portal at the Argent Energy Tower in exchange for what she wanted. Dr. Hayden, anticipating this, had recovered the Doom Slayer from his entombment in the Kadingir Sanctum in Hell as a contingency, believing the ancient warrior to be the only solution in case he was unable to prevent Olivia's plans. These became increasingly obvious to him as they clashed, particularly over Samuel's plans to retrieve the marine, which the demons berated Olivia for allowing to happen.

After leading the UAC on Mars into an ever-maddening spiral of demonic worship, she eventually unleashes a Hell Wave from the portal in the Lazarus Labs facility. While she promises the others that they will have "a place at the table" in the new order that is created, and whether or not she once actually believed this as she states, the results are quite the opposite, with the entirety of the base's population, excepting only herself and Dr. Hayden, dead or zombified in the aftermath.

The Doom Slayer can eventually discover a note from Pierce in which she admits to her followers that their only purpose in life (in her eyes) was to aid in and witness her ascension to godhood. It ends with the line, "Thank you for your service. May you rot in hell," demonstrating that by the time she put her plan into action, her only concern was her own power, showing utter contempt for her followers once their purpose to her was fulfilled.

After successfully opening her portal and leaping into the Argent energy stream, Olivia is teleported into Hell. She is eventually caught by the marine when he re-enters the underworld and finds the remains of Argent D'Nur, where Olivia has been tasked with preventing the shutdown of the Well. To enable this, the demons uphold their end of the bargain—from their perspective, at the least—by transforming Olivia into the latest reincarnation of the Aranea Imperatrix, a massive brain-shaped creature with an arachnid-like mechanical chassis, an Argent plasma gun, and immense telekinetic powers. She proceeds to battle the Doom Slayer in this form, but is ultimately unsuccessful. She is completely obliterated by the marine when he shoves the business end of his BFG-9000 into her mouth and pulls the trigger, blowing away most of her head.

Doom Eternal reveals that after Olivia's death, Deag Ranak took control of the cultists within the UAC, bending the entire company's mission toward opening the gates of Hell on Earth. As part of his efforts, he had his followers collect genetic material from the corpse of the Spider Mastermind. Using this, they created the arachnotrons. She was also memorialized with a statue in the Nekravol in Hell, which the Doom Slayer destroys in order to access the inner-most tower.

Olivia was first seen in holographic form during an id Software stream on Twitch, announcing to her "sisters and brothers" the end of their life in the present world, as she believed the demons would create a new world for them to rule. 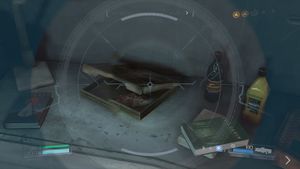