One Humanity, internally named S2MAP05 according to its original text file, is a single-level for Doom II designed by John Romero and released on March 2, 2022 (a March 4 update adds a README.txt with further documentation). The level was sold for €5.00 with all proceeds going towards supporting the humanitarian efforts of the Red Cross and the UN Central Emergency Response Fund in the wake of the 2022 Russian invasion of Ukraine.

The map is the first Doom II map Romero had made since the game's 1994 release. The level was created for and is intended to be included in Romero's upcoming megawad, SIGIL 2, and shares several design tropes from his previous release, SIGIL, such as shootable eye switches, navigating narrow catwalks, and red cracks in the ground. The par time defined in MAPINFO, as well as in the DEHACKED lump, is 2:24. 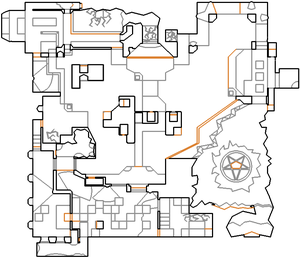 Map of One Humanity
Letters in italics refer to marked spots on the map. Sector, thing, and linedef numbers in boldface are secrets which count toward the end-of-level tally.

This is a medium and tight map, with little room to maneuver and high verticality. If you have played SIGIL before, this map has a familiar aesthetic style and gameplay. A key tip to complete it is to always shoot the evil eyes you encounter and be mindful of your surroundings.

You start this map directly into combat, with several imps and chaingunners from side to side, and, behind you, a Hell knight. In front of you is the first switch (an evil eye) that activates the platform. Follow the new path and you will reach the red door. Just behind you (in front of the red door) is a secret room with the red key. Next to it, you will find the evil eye that opens it.

Now, after the red door, enter into the crates area. To your left is the super shotgun, and to your right is a path that leads to a room with an archvile guarding a plasma rifle. The path to the left, through the nukage, is the correct progress. Continue until you reach a wall with a different texture, click on it to open it. Go up the lighted stairs and you are out of the drainage. On the way out you will see the next evil eye easily. Follow the new path until you enter a small corridor, which has a switch that lowers the walls to the next area. This area is guarded by several barons of Hell. By this point, two cyberdemons will have teleported to the bottom of the area.

Follow the path, being careful of the cyberdemons, and you will be at the start of the map again. The next evil eye is to the south. The platform will lead you to the last area, where you will encounter a dead end. To your left, to the east, there is a small section with bars. At the bottom, you will find the hidden evil eye, which opens the next area just behind it.

The next room will be full of various enemies, but, above all, an invulnerability sphere, which you must pick up to open the exit. Once you pick it up, several barons of Hell will teleport right next to you to attack you immediately. Eliminate them, and now simply enter through the final door to finish this challenging map.

* The vertex count without the effect of node building is 1742.