Oniria is a single-level PWAD for Doom II, authored by Aluqah and designed for ZDoom. The new color scheme (PLAYPAL and COLORMAP), which plays a significant role in the level, was created by Jon Dowland. At the 13th Annual Cacowards, the PWAD was listed as a runner-up alongside Zen Dynamics by Xaser.

In Oniria's story, you are having a nightmare from which you cannot awaken. You find yourself in a bizarre world where everything is black-and-white with the exception of the color red. The only thing you can do is to explore the world with the hope that the nightmare would eventually come to an end.

While the visual look of the game has been altered substantially, the gameplay of the sole level does not differ much from a regular vanilla Doom level. A noteworthy feature, however, is the amount of keys. You actually have to find many items of the same type to unlock new areas. To make progress easier, an info table of the found keys is visible on the screen by default. Obtaining the keys requires mainly slaughter of monsters. Their behavior has not been changed, and the black-and-white palette does not render them difficult to see, but there is a considerable amount of them (the ultimate count being over 250). Aside from monsters, a few tricky parts are offered. Solving them requires jumping or attention to visual details. 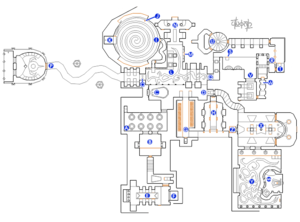 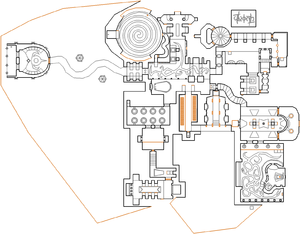 Map of Oniria
Letters in italics refer to marked spots on the map. Sector, thing, and linedef numbers in boldface are secrets which count toward the end-of-level tally.

The first thing you will meet is the stimpack equivalent of Oniria. After the opening drop, you can see it as a red object in the corner in front of you. (A) Approach the item, and you will become ambushed by a group of zombiemen to your left. Slay them one by one with your pistol. After doing so, kill the heavy weapon dude that lurks in the adjacent checkerboard room (B) and get his chaingun.

Once the coast is clear, enter the doorway in the north and watch out for the monsters to your left. (C) To the right, there is a supercharge in a distance protected by a couple of bars. (D) Kill the imps that guard the area and arm yourself with the super shotgun that can be found next to the bars.

In the following part of the level, the progression is fairly non-linear; in order to get the soul sphere and reach the hidden zone behind it, you must find four white skull keys that are scattered all over the map. The following list separates the quests from each other, and you can accomplish them in the order you desire.

For the two remaining quests, you must visit the area below the supercharge corridor. (L) The first threat on the bottom consists of ten zombiemen and four imps at the worst. But since there is a considerable amount of ammunition, you do not need to be especially well equipped when you descend there. If you fell while trying to reach the black door or would like to return up for another reason, go to the north at the fork of three directions and pay attention to the wall to the right.

There is a switch above you. (M) The steps around it suggest that the designer wanted the player to jump his way to the switch. However, this is unnecessary as pressing the wall in front of the switch is enough to get it activated. Once there has been a hit, you will be teleported on a high ledge with a backpack. Run straight to end up back onto the supercharge corridor. (C & D)


Press the bars in front of the supercharge (D) to gain access to the item and a new area. After quelling the light resistance in the twisting passageway, proceed to a hall with bizarre lighting columns in its center. (X) The wooden door covers a room that connects the two ledges around the columns. Be prepared for an attack by four lost souls before entering there. Destroy the remaining enemies in the room, collect the computer area map if you need it, and go through another wooden door.

Enter a red portal to find yet another outdoor area and a revenant. Note that when you exit the platform, nine imps will appear at the yard. (Y) Clear your way to the southeast corner of it, kill the revenant duo there, and press the switch. Five cacodemons will be released from a chamber nearby. Destroy them or they will follow and disturb you in the next phase where you have to cope with other strong enemies.

Return inside and go to the lower area where the columns stand. (X) Drop yourself at the section that is not protected by railings. The third and last arch-vile is ready to assail you in the room to the west. (Z) Make sure to kill him before taking the key in his room, as collecting will awake two dormant revenants at the other end of the area. Press the switch in the east to get back up when you are done.

Back in the yard (Y), climb the stairs to reach the gray door. With the discovered key, you can enter the room beyond. (AA) Step onto the bed to finish the level and start the ending sequence.

* The vertex count without the effect of node building is 3713.