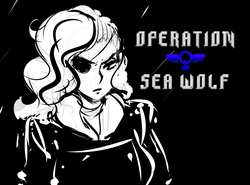 Logo for Sea Wolf, with Juno's portrait drawn by SemuElo.

Operation Sea Wolf is a total conversion for GZDoom/Doom II developed by Mike MacDee (Impie) in 2018 (currently in Beta phase) and slated for full release in 2019. It is an 8-map remake of Operation Arctic Wolf by Las Rojas, and the third "Winter Agent Juno" mod, following Project Einherjar and Midgard Outlaw. Impie remade the Arctic Wolf maps from scratch, often combining several locations into a single, sprawling map.

Juno is drafted by her government to destroy an enemy operation centered around a stealth submarine which could allow two maniacs to dominate the globe. The mission is somewhat personal for Juno, as one of those maniacs is an old rival with a score to settle.

Juno's overall mission is to locate the Sea Wolf stealth sub and destroy it. This task is divided into 8 objectives covered in Juno's original briefing at Valkyrie Guard HQ, with each map based around one objective. Each map begins with a flashback to the section of the briefing relevant to Juno's present location: after reviewing her objectives for the current map, Juno is thrust into the action.

The music all comes from the industrial-flavored PS1 era of gaming.