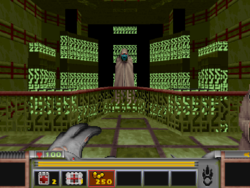 The Oracle awaits the player in its inner sanctum.

The Oracle is a character from Strife. It appears to the player in his Temple as a robed human wearing a blue mask. It uses The Order's minions as guards and a spectre can be seen floating in a hole at the ceiling of the Oracle's room.

When the player shoots it, the mask and robe fall off revealing a skull on a non-human body that proceeds to fall apart. Whether it was alive before the player shot it or whether it was simply a dummy for the aforementioned spectre to speak through without arousing suspicion, is undisclosed.

Once the Oracle is killed, the spectre comes through the hole to attack the player.

If Macil is killed first, the worse of the two good endings is presented. It is not possible to travel to the processing factory that turns humans to acolytes, as the Oracle will send the player to the Loremaster. After killing the Loremaster, it is necessary to kill the Oracle to get the last Sigil piece.

If the Oracle is killed first, the better of the two endings is presented, as Macil sends the player to a factory where a cure for the virus in the story is found, and BlackBird's true appearance will be revealed.

The fight with the Oracle is triggered either when the player ultimately expresses his distrust to it or when he simply attacks the dummy or the Spectre at the top of the room. When alerted, the Spectre will teleport behind the player and the acolytes will start shooting. When one tries to escape the room, the Spectre may be blocking the way. If one gets past it, there are still the two templars - unless the player crushed them by using the enemy-free path - and a flood of acolytes that teleport into the room. It is recommended to eliminate all the acolytes and templars before the fight. The Spectre is not very strong but it is deadly if one gets too close.