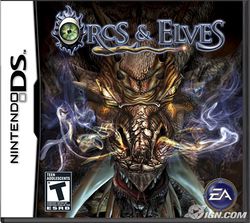 Box cover of the Nintendo DS version of Orcs & Elves.

Orcs & Elves is a mobile phone game based on the Doom RPG engine and created by John Carmack and Fountainhead Entertainment. The game has also been ported to Nintendo DS.

The game is described as an adventure RPG, in which the protagonist, a young elf, must retake a Dwarven city from the evil army occupying it. The player is equipped initially only with a sentient, talking magic wand and a sword, but other weapons become available.

Compared to Doom RPG, changes in the J2ME version include:

There are five versions of the game: