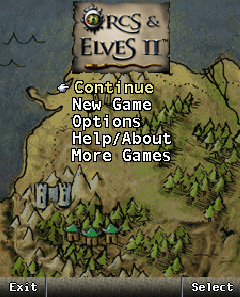 Orcs & Elves II, the sequel to Orcs & Elves, is the third mobile phone game based on the Doom RPG engine. The game was released first in North America on December 3, 2007 for the Qualcomm BREW platform, and in Europe later the next year.[1] A J2ME version was additionally released in 2008.[2]

The game does not continue the story of the protagonist from Orcs & Elves but takes place shortly after the events on Mount Zharrkarag come to a close. Players take on the role of Valin, a thief elf who was tasked to retrieve the talking magic wand Ellon in order to aid his town, Sol, from a siege. Upon stealing the wand, he found that its powers were nearly exhausted. Some time will pass before it will regain its former strength. Valin must traverse cavern, towns and forests to quickly return to Sol with Ellon to help his people. This will not be so simple: ever since the attack on King Brahm's Citadel, evil forces have been trying to overtake parts of the land.[3] Even worse, Valin entered into an argument with Ellon, and as the result the wand is no longer willing to help Valin in his quest.

The game's development cycle was inspired by the painful development of the first title. It designed first for low-end phones, with higher-end hardware receiving visually upgraded and better performing ports of the game. This led to significant time savings in comparison to the prequel.[4]

A significant change in comparison to its predecessor was the addition of a mouse familiar. In an interview, Katherine Anna Kang mentioned that she had always tried to smuggle a friendly creature into their games. This was in opposition to John Carmack, as he was reluctant to implement those ideas. However, after success with Doom RPG's hellhound, there was a less resistance to the mouse familiar idea. A significant amount of work was done in order to make the familiar playable. Several ideas were scrapped in the process to make it to work.[5]

The following features were added to the high-end BREW version: 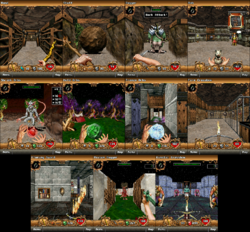 Talking wand
A weapon and companion of Valin. Its powers were nearly exhausted in Orcs & Elves. With each of Valin's level ups, the wand recovers more and more of its former strength.
Guiding staff
Apart from combat, it can also be used to move boulders.
Magic dagger
It can be used to backstab, be tossed at enemies, or strike at close range. When tossed, it will return once damage has been inflicted on an enemy.
Bob
A familiar acquired during the game. It can be used to scout. It has a limited number of turns before it will return to its owner. With each of Valin's level ups, the number of turns available will increase. Familiar chow can be also used to increase its endurance.
Shrink orb
Shrinks an enemy on impact. Shrunken enemies deal less damage and have lower accuracy.
Mold orb
Contains mold spores, which are released upon an impact making enemies sick.
Freeze orb
Freezes enemies on impact. The effect lasts for three turns.
Fire crossbow
A light-weight weapon that launches fire bolts. Sets enemies on fire.
Flaming sword
Imbued with the flame of Gaya's Breath. Particularly effective against wraiths and treants. Similar to a crossbow, sets enemies on fire.
Poison dagger
Replaces the magic dagger. It is enchanted with lethal venom which poisons enemies when hit.
Kinetic crossbow
Replaces the fire crossbow. Delivers fire bolts with a powerful kinetic force. Ideal for a crowd control. Should not be used at close range. 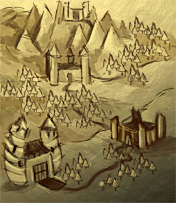 Quest map available in the BREW version of the game.

Unlike the prequel, this game does not have a hub zone allowing teleportation between locations.