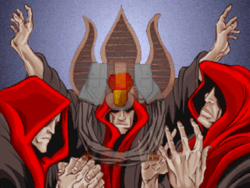 Priests of the Order worshiping a hologram of the Sigil.

The Order is a militant cult in Strife: Quest for the Sigil whose members heard the voice of a malignant god in their heads after being infected by a disease which, while killing millions, mutated and deranged many of the survivors. The disease spread from the impact of a comet which itself caused a global calamity, throwing the world into disarray. Driven by the voice of the One God to abandon natural procreation and turn to cybernetics and robotics, the members of the Order convert themselves and others into unfeeling machines while slaughtering all women and children they find. Those who are not converted immediately are enslaved and forced to do hard labor for the Order. They relentlessly seek the five pieces of the Sigil of the One God—a sentient weapon which they worship—and the promise of immortality and omnipotent power which the voice claims will come with their reunion. At the time that Strife begins, the Order threatens the entire known world with its power, controlling a technology far beyond that previously known to humankind.

The oppression and tyranny of the Order eventually lead to unrest and the formation of a rebel movement known as the Front, seeking against all odds to overthrow them. 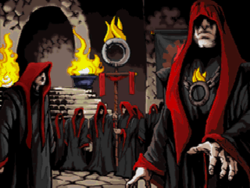 High-ranking priests of the Order at a religious gathering.

Power in the Order is uneasily divided between the known wielders of the pieces of the Sigil, most of whom are heavily enhanced with cybernetics: 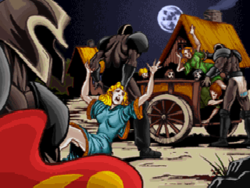 Order acolytes round up women and children from a small village for extermination.

The Order's soldiers revolve around cyborgs and robots with names of religious ranks.

The Oracle is said to be a former high priest of the Order who is sympathetic to the Front's cause. He controls a considerable force from his temple. 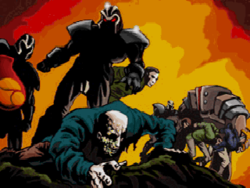 The Order is merciless to those who suffer under its rule.
Spoiler Warning: Plot details follow.