Order of the Deag 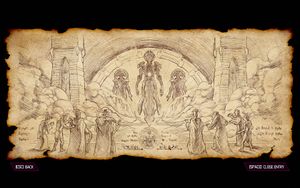 A page from the Ligra Sultagenta, the Night Sentinel Book of Kings. King Etrex is visible with entourage at the left and Deag priests on the right as the Maykrs arrive on Argent D'Nur.

The Order of the Deag was an ancient priesthood founded by the Argenta of the world of Argent D'Nur. The order was created to study the Elemental Wraiths, primordial beings of immense power which were deified by the Argenta. This study yielded arcane magick wielded by the priests.

In the time of King Etrex, known as the Time of Grief, "white porcelain" beings who called themselves the Maykrs arrived on Argent D'Nur, presenting themselves as gods and angels, and offered the people great gifts of magic and technology, as well as a promise that the faithful would eventually come to dwell with them in the paradise of Urdak. After this time, the Deag priesthood was gradually rededicated to the worship of the Maykrs, as by contrast, the old gods were said to offer at most respite from their own wrath. The Elemental Wraiths were eventually put to slumber as a result, though the Argenta continued to derive their Sentinel energy from them.

Among their other duties, the Deag priests administered assignment of prisoners of war and criminals to the sacred Coliseum and had oversight of the trials by combat which took place there.

In the time of King Novik and the struggles against Hell on Argent D'Nur, the Order of the Deag became corrupt, though the extent of this corruption was evidently unknown to the Night Sentinels initially. The Order priests acted in concert with the Khan Maykr to build a massive factory in Hell known as the Nekravol, which would convert the souls of their own fallen into Argent energy. In their deep studies of Hell, these members of the Order Deag became physically and mentally twisted and evil beyond redemption. After their betrayal of the elite of the Sentinels, corruption of the Betrayer, and ultimately, bringing about the downfall of Argent D'Nur, they became known as the Hell priests.

In the time of King Novik, three Deag priests were known:

Known members of the Order of the Deag wear varying head gear, including diadems or circlets, crowns, and mysterious devices that cover the the eyes and allow sight through multiple lens-like openings. They carry staves of varying design.

The ability of Deag priests to teleport is apparent. They are also known to be skilled in psychomancy and psionics.