Out of the Aeons 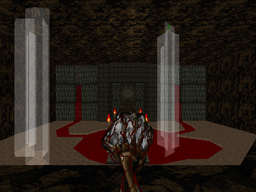 An ominous Underworld fortress. Light from the surface world peeks in from above. 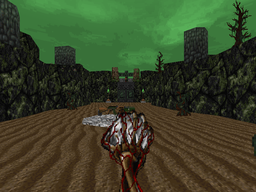 Beyond this gate awaits the House of Dagon and other horrors.

Out of the Aeons is the fifth and final episode of Strange Aeons. It is a bonus episode added in 2016, concluding the adventures of the Traveler.

Most of the episode takes place in the Underworld, briefly visited in the conclusion of The Stagnant Fortress. The Underworld is a vast network of caverns and catacombs inhabited by a variety of ravenous undead creatures, which live in compounds of green and red stone decorated with human skin. In many areas the light of the surface world pierces through the ceiling in eerie white shafts. The player once again is aided by the Ghouls on several occasions.

The episode concludes in the sunken city of R'lyeh, which the player gets numerous glimpses of before the finale. It is a watery wasteland of wet sand, green rock cliffs, and bizarre formations of green soapstone. In both realms the player is plagued by Vulgars and Roaches, both of which hail from R'lyeh.

Years after his original dream quest, the Traveler learns that his nephew Daniel has disappeared after suffering dream visions of R'lyeh. He enters the Dreamlands once again to locate the boy, losing his trail in the Underworld. The Traveler's ghoulish friends inform him that the boy is being used as an anchor for Great Cthulhu, who is awakening once again to destroy the earth.

Using an Underworld temple of Cthulhu, the Traveler travels to R'lyeh and battles the Children of Cthulhu for Daniel's soul, ultimately rescuing the boy and sending the Old One back to its eternal sleep. The boy returns to earth, but the Traveler remains with the now sinking city to rejoin his son David in the afterlife.

Impie had entertained the idea of an Underworld episode even before Strange Aeons was completed, but never knew where to go with the idea. By 2016 he had accumulated a number of lesser-known and incomplete Doom maps on his hard drive, which he didn't know what to do with. Realizing he had enough material for a fifth episode, he retouched the finished levels, completed the unfinished ones, and inserted many Cthulhu Mythos assets he had collected over the past year. As a result the episode plays more like a traditional Doom episode than any of the other episodes, focusing more on action than atmosphere and exploration.

The story is based loosely on the first and third chapters of The Call of Cthulhu, wherein an eccentric artist suffers dream visions that prove to be portents of Cthulhu's awakening, and the subsequent end of the world (which is narrowly averted by a lucky sailor).