Outpost 21 (OPOST21.WAD) is a single-level PWAD designed by Scott Amspoker. It was noted by Doomers of that time for its varied environments, its balanced light levels, and its careful matching of monster population to architecture.

A modified version of this level appears as E1M6 in the 1995 WAD compilation, Heroes. 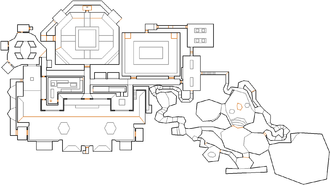 Map of Outpost 21
Letters in italics refer to marked spots on the map. Sector numbers in boldface are secrets which count toward the end-of-level tally.

The blue key can be picked up without lowering the pedestal.