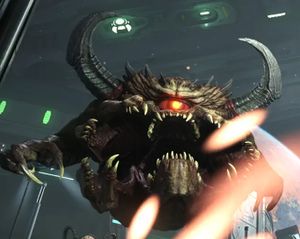 The pain elemental as it appears in the Quakecon 2018 gameplay video.
This article is about the monster in Doom Eternal. For other games, see:

The pain elemental retains a relatively unchanged appearance from its Doom II version: it is a circular, flying, brown demon with a single large red eye with an orange pupil, two long black horns, two muscular arms with prominent claws, a pair of small nostrils beneath its eye, and a large mouth like that of the cacodemon with eight mandibles which can open and close independently. The pain elemental also seems to bear a resemblance to the cacodemon from Doom 64.

The pain elemental retains its ability to spawn lost souls from its classic counterpart, which hover nearby until they can attack the Doom Slayer; it can also use them as a direct attack by throwing them, in which case they will behave like fast homing projectiles that can be shot down before they hit the player. Occasionally it will also generate a trio of lost souls and fire them off in a barrage. The lost soul attacks are dangerous if room to dodge them is limited, as they will inflict splash damage even if a direct hit is avoided. If the player is too close for the pain elemental to use its lost soul attacks, it will resort to slashing with its claws.

Pain elementals will try to dodge attacks using an air-dash if they notice a weapon being pointed at them, so it is best to wait until it is either distracted or about to attack before shooting it; even then, they have health roughly on par with a Baron of Hell and so will take considerable firepower to eliminate. Additionally, pain elementals may try to use nearby lost souls as a living shield by forcing them to move into the path of incoming projectiles. Using the Meat Hook on a pain elemental is not advised, as it may grapple onto a lost soul by accident and leave the player in a potentially fatal position.

The lock-on burst modification for the rocket launcher can effectively deal with pain elementals as they cannot avoid the path of the guided missiles and is needed at least two bursts to kill it. Like other flying monsters, it takes extra damage from the ballista.

Pain elementals are native to the deep, primal region of Hell known as the Umbral Plains. Pain elementals constantly generate lost souls within their bodies, a process resulting in unceasing, life-long agony. The pain elemental can only find respite from its wretched existence by inflicting misery upon others, lending it a fondness for indiscriminate destruction and making the innocent suffer.

The pain elemental is one of the six playable demons in the Battlemode multiplayer game mode. Its attacks are throwing a lost soul directly at the Slayer and using idle souls as a shield mechanism to protect itself from oncoming attacks from the Slayer. As a result of its airborne nature, it can maneuver freely through the air but relies on its shield to compensate for its inability to take cover from attacks easily.

Lost souls spawned by the pain elemental display various modes of malfunction in the initially released version of the game - they may become stuck in place, spawn partially or completely inside walls, become trapped in short circular orbiting paths, and often leave behind particle effects and looping sounds with no visible corresponding source.

The pain elemental was first confirmed to exist in the teaser trailer released at E3 2018 and was later shown in full at QuakeCon.