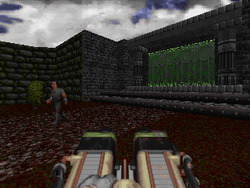 A peasant near the Borderlands exit in Tarnhill. 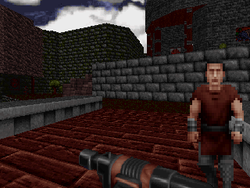 A peasant on the bridge in Tarnhill.

The peasants are the townspeople in Strife. They do not do much except for walk around aimlessly. The player can talk to them to get opinions and minor information about the Front or the Order. Alternatively, they can threaten to call the guards or ask that the player not hurt them. Some, such as Ulaine, ask for money in exchange for more valuable information. Peasants retaliate against attacks with a weak punch. Many peasants reside in the town and the commons.

The peasant actors are also used by various characters, both minor and major.

The peasant exists as 22 distinct actor types with mostly identical properties aside from their color. This large array of actor types allows various characters to co-exist on the same map with different conversation ID numbers.

These statistics reflect the base characteristics of the majority of peasant actor types. Deviations for specific types were noted above. Note that bit flags 28 through 30 are added to change the color translation appropriately (the base color of the peasant without any color swap bit flags applied is tan).

In the IWAD peasants exist in 23 variants, but in many maps they have roles as minor characters with specific names per the table above, which are used in the things tables on the pertaining map pages. Below are the raw statistics of the unnamed actors.

Peasants are first encountered on these maps per skill level:

The IWAD contains the following numbers of peasants per skill level: