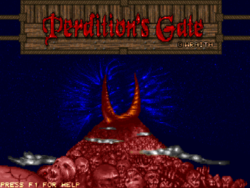 Perdition's Gate is a 32-level commercial megawad for Doom II designed by Wraith Corporation and published by WizardWorks in 1996. An 11-level demo version was distributed via the Internet and on the D!ZONE Gold compilation disc. Unlike its sister release, Hell to Pay, which is a partial conversion, Perdition's Gate only contains new graphics for various textures and new music besides its levels.

Over 15,000 years ago, an alien race existed in a distant galaxy, a race of beings that had mastered ways of mixing technology with the power of the mind. These were the overseers of the universe, protectors of developing worlds, and masters of incredible technologies. Yet, possessing such technology led to conflicts with savage alien races, including a race of monstrous demonic aggressors.

A war ensued between the savage demon race and the alien overseers. The overseers attempted to make peace with the attacking force but their attempts ended in miserable failures. The savages were a race of pure evil, no understanding of diplomacy or peace. In a desperate final attempt at suppressing the aggressors, the overseers closed down their most valuable technology, the inter-dimensional teleporters. Before all the teleporters were powered down, legions of the demonic race made their way through, wreaking havoc on under-developed, formerly protected worlds. One of those worlds was Earth, many thousands of years ago.

The sight of raging monstrous creatures to villagers and peasants in Earth's biblical times bred fear in the minds of all. Eventually, the small unsupported armies of monsters were destroyed, but the advent of these creatures rooted myths into human culture about demons from Hell.

Thousands of years of development followed as the people of Earth began to forget about demonic myths and legends of the past while passing headlong into the technological era. At the same time, the demons took over the former overseers' world, and began attempting to understand the overseers' awesome technology. Masterminds were bred to help teach and integrate the demon technology with that of the overseers. Not until recently did the demon race possess the power to re-commission the inter-dimensional teleporters. Thanks to the efforts of human experimentation on the moon of Phobos, the teleporters on the overseers' world were given life once again. Soon after, the demon masterminds began to understand the workings of the overseer technology and built up attack forces to continue their conquest of the universe.

Four years have passed since Earth marine forces won the war against the demon aggressors. You are a cadet marine who has been called upon to serve in the UAC strike force while they continue running controlled gateway experiments at their Earth headquarters. Arriving at the main gate on your first day of service, you notice that things seem amiss. You pull out your service handgun, and enter the main gate suspecting the worst. Little do you know, but you are about to embark on a journey to the overseers' world, the dawn of a new battle on another plane of existence. Hopefully, you have what it takes to clean out the alien world, and find the portal leading to the plane of Hell itself; hopefully, you can find and destroy Perdition's Gate.

There is a discrepancy between the packing and the actual game. In the game files, the plot involves an alien invasion from outer space, while the package states that the invasion is due to an experiment gone awry. This is likely due to poor oversight on WizardWorks' part.

The story as written on the package:

An experiment gone wrong, very wrong... a scientific genetics engineering plant has been taken over by those very mutants it created. You must find out what happened... and the only way to do that is to fight the monsters to the death.

The ultimate test of your skill, wit and personal character.

Map credits were provided by Kmxexii.

The map names were taken from the output of PG-PLOT.COM (executable file on the disc).

World of the Ancients:

The DSDA episode records for Perdition's Gate are: