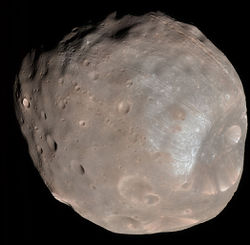 In Doom Eternal, Phobos is the starting location for the Mars Core mission. The Doom Slayer travels to a mining and communication relay in one of Phobos' craters and gains control of its BFG-10000 weapon, using it to blast a hole in the surface of Mars. In the game, the asteroid seems to maintain some level of atmosphere, since mist can be seen extending out into hilly terrain in the distance. This facility also served as one of the scenes during the QuakeCon 2018 gameplay reveal. It featured the orbital base under attack by demons, along with the BFG-10000 firing periodically towards an unconfirmed location.

Exterior of the Phobos Compound in Doom: Annihilation.

Phobos serves as the setting for the 2019 film Doom: Annihilation, which retells the story of Knee-Deep in the Dead with various artistic liberties. Rather than being linked with Deimos as in the original game, the Phobos teleportation lab is directly linked to Earth via a gate left on the moon by an unknown ancient civilization. Phobos is stated in the film to be a highly unstable location often referred to as the "Doomed moon."