Phobos Mission Control is a single Doom level for limit-removing ports created in 2016 by John Romero as a second warm-up exercise before working on a new FPS game, Blackroom. It is an alternate take on E1M4: Command Control. 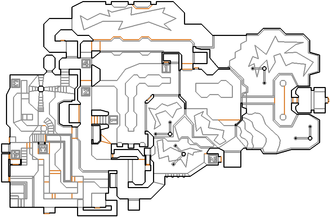 Map of Phobos Mission Control
Letters in italics refer to marked spots on the map. Sector, thing, and linedef numbers in boldface are secrets which count toward the end-of-level tally.

Whenever you see any deep pits in slime pools, do not fall in. These pits are inescapable, and are type 16 damaging floors that will put an end to you quickly.

You begin in a semi-open air area. Head to the southwest, kill the zombieman and take the chaingun he was protecting. This lowers a ledge containing up to three shotgun guys, two imps, a zombieman and a demon. Grab yourself a shotgun (if available) and slaughter these enemies. Next, go to the switch marked "1" in the northeast of this area and flip it. This opens up a staircase in the west of this area, but also reveals a ledge in the north with a number of former humans and imps.

Head up the staircase in the west, then go south and follow the brown catwalk around. You will have some former humans and imps to deal with. Eventually, you will come to a thin ledge in the south of a slime pit. Kill the imp and zombieman in the alcove to the east, then follow the ledge onto the alcove and flip switch 2.

After flipping switch 2, turn around and an imp will be revealed on the chainsaw platform to the west. A burst from the shotgun will do. Also, a number of traps have opened on the brown catwalk. These monsters are not deaf, so lure them onto the ledge for a chokepoint, where you can easily mow them down with a chaingun. In total, you will need to kill a zombieman, three shotgun guys (one on Hey, not too rough and below), two imps (one on Hey, not too rough and below) and one demon.

Backtrack to the brown catwalk and head north. You will attract the attention of up to three demons. From the "4" sign on the floor, turn left, then left again. Descend the stairs into a computer room infested with more imps, demons and shotgun guys. Grab the armor and head southeast into a narrow passage. Shortly after entering the passage, the L-shaped computer bank to the west will open out with a large number of imps and former humans. Continue forward until the passage widens out into the southeast corner of the room. From here, take the right path, then the first right to enter a path that leads to switch #3.

Backtrack to the north of the computer room, then head into the passageway in the northwest marked "3". Follow this passageway to its end, where there is a staircase. Use this to get up onto one of a number of brightly lit ledges in this computer room. This ledge sequence has a number of traps:

Backtrack to the entrance of the computer room. From the "4" sign, head north, then east. Pull out your chaingun and mow down all the cannon fodder on the walkway ahead. Walls will open to the north, exposing you from fire from enemies across a slime pit, but they should not be too much of a problem. Be careful of a trap that opens to the south, which is designed to send enemies behind you while you are being caught up in dealing with the cannon fodder on the ledge.

Follow the walkway around to a platform. When you step on it, it lowers you into a large room with quite a number of enemies. Quickly rush to the south of the room and collect the items (including 4 shotgun shells, a clip, a box of rockets and a medikit. This lowers the grey structure in the middle of the room, revealing some shotgun guys, but also lowers a wall in the east of the room, revealing the bridge to the exit room.

Cross the bridge and walk around the two pillars instead of between them (this avoids triggering a trap). Open the exit door and put two rockets inside to clear out the exit room. Flip the switch in the exit room to exit the level.

After completing the computer room and proceeding to the northern walkway, drop into the slime pit and head west. This leads into a slime tunnel containing a computer map. Use the switch next to it to lower a platform, which leads you into an opened trap opposite the entrance to the computer room.

* The vertex count without the effect of node building is 1513.

Phobos Mission Control is contained in a ZIP archive whose filename is e1m4b.zip. Said ZIP archive has the following SHA-1 checksum:

The contents of e1m4b.zip are as follows: