Many of the Doom engine graphics, including wall patches, sprites, and all menu graphics, are stored in the WAD files in a special picture format, known as the patch format. This format is unique to Doom. Notably excepted are the textures for floors and ceilings, which are known as flats. Note that startup screens, help pages, and other similar graphics in Heretic and Hexen are simple 320x200 linear graphics.

Details of the patch format in Doom were first described in the Unofficial Doom Specs.

A patch header gives its width and height, and offset values. Following the header are pointers to data for each column of pixels; the number of these pointers is equal to the picture width.

The data for each column is divided into posts, which are lines of colored pixels going downward on the screen. Each post is described by its starting height (relative to the top of the picture) and number of pixels, followed by a value for each of the pixels. Picture descriptions can (and do) skip over some pixel positions; these pixels are transparent. (Since transparent pixels are not changed when drawing a particular picture, whatever was drawn into the frame buffer previously will show through.)

Note that gamma correction, a user-adjustable setting that can lighten the colors for dark-looking monitors, is handled when setting the game's palette and not when actually drawing the graphics themselves. This avoids an additional indirection.

Some WADs have compressed patches, where several columns have identical pixels, they set several columnofs entries to point to one copy of the column data.

Each column is an array of post_t, of indeterminate length, terminated by a byte with value 0xFF (255).

Some games similar to Doom, such as Rise of the Triad, use a similar format, without the two pad bytes.

Converting to a doom picture[edit]

This algorithm will convert some pixel data (eg, from a windows bitmap file) to a doom picture.

Converting from a doom picture[edit]

This algorithm will convert a doom picture to some pixel data.

Earlier versions of the format[edit]

The patch format originally (in the alpha and beta version) was more compact but limited. The alpha used bytes (instead of words) for dimension and starting offsets in the picture header. Both alpha and beta use words (instead of dwords) for locating column offsets, and neither features the dummy bytes that were added to the column spans in the final version.

For comparison, a table of the old and the new inserted in the patch_t struct from the Doom source code:

A minor variant on the beta patch_t format is also used by Rise of the Triad:

Since the alpha version of the picture format used a byte for height and width, it did not support images larger than 255 pixels in any dimension. Other formats were therefore needed for wide graphics. The following formats have been used in alpha versions before being discarded:

SLADE3 can display all these graphic formats. 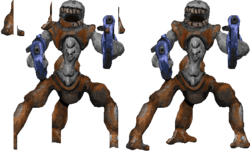 A centaur from Harmony. To the left, tall patches are not supported; to the right, they are.
A post starts with a two-byte header, the first byte containing the post's "topdelta", or its vertical offset from the top of the picture, and the second containing its length. This means that a post has severe limitations. Since the format uses a single byte to store a post's offset from the top of the image, if a picture is tall (more than 255 pixels high) it is possible that a post's topdelta becomes impossible to express normally. A topdelta of 255 is reserved to signal that there are no more posts in the column, and since it is stored in a single byte, a topdelta therefore cannot be larger than 254.

A workaround was designed, which is known as DeePsea tall patches. A post's topdelta is compared to the previous post's topdelta (or to -1 if there are no previous posts in the current column). If the new topdelta is less than or equal to the previous topdelta, it is interpreted as representing a tall patch, and the two values are added together, with the sum serving as the current post's offset. Since a post is normally supposed to go below its predecessor, this trick is usually non-ambiguous. However, if support for tall patches is not implemented, then these posts end up overwriting previous posts by being put at their literal offset, rather than the derived one.