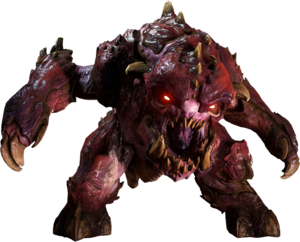 A pinky.
This article is about the monster in Doom (2016). For other games, see:

The pinky is the new form of the demon in Doom (2016). Referred to as a demonic animal, the codex states that it is unnamed by the demons in Hell, and as such the UAC simply named it for its predominantly pink coloration. It was initially discovered by the Lazarus Project during the Tethering Operation.

The pinky is fast, and in its most common form it has a thick plating of bony armor on the front of its head which is nigh impervious to damage. It will charge at the player on sight and then attempt to bite them if the charge does not kill the player first. The most prudent strategy is to get it to charge into a wall, which will stun it temporarily, and then circle around to attack its vulnerable back side; tricking it into charging off a ledge and into a bottomless pit is also effective. Unlike some of the other demons, the pinky is much, much tougher than its older game counterparts and can instantly kill you even if your health is a little low so it may be prudent to save your chainsaw for it. Interestingly, detonating an explosive barrel near it can result in its facial armor being blown off, allowing it to be further damaged from the front.

The pinky's head is covered with a thick sheet of bone, which it uses as a battering ram to run down its prey. While they are able to accelerate quickly, they have difficulty changing their direction in mid-charge. The skin on their flanks is rather thin, leaving it vulnerable to attacks from the side.

These aggressive beasts are unnamed by the denizens of Hell, and were given their current name on account of their distinctive coloration.

UAC research indicated that the pinky has limited vision and therefore depends mostly on its sense of smell, being able to detect various types of pheromones. The pinky was first discovered on an expedition catalogued as MTC 2146/351. Half-eaten pinky corpses recovered on later expeditions suggest that pinkies are sometimes consumed by the other demons as a delicacy.