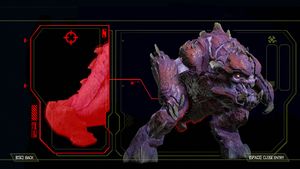 The pinky's depiction its codex entry.
This article is about the monster in Doom Eternal. For other games, see:

The pinky returns in Doom Eternal with a form identical to that in the previous game. Its frontal shielding, while still extremely formidable, is not as absolute, however - persistent attacks can eventually pierce it, and the strongest weapons, such as the ballista's destroyer blade mod, can bypass it entirely.

Like its counterpart from Doom (2016), the front of the pinky is heavily armored but its tail has no armor at all, so the player should attack the pinky's tail to inflict the most damage. A direct blood punch will instantly kill it, even from the front.

The pinky actually has 1000 HP, but increased damage is dealt to the tail, or by the blood punch.

The pinky's main attack is to charge at the player, which the player can avoid by double-jumping or dashing. The player should try to trick the pinky into charging into walls, which will stun it long enough for the player to attack its tail. The pinky can also be frozen with an ice bomb to stop it turning round.

Since their numbers began to rise on Earth, pinkies have become the bane of ARC fortifications. A charging pinky can smash down walls and immobilize or even overturn armored vehicles with ease, all while shrugging off weapons fire with its tough carapace. Among the demonic forces, they are used as line-breakers, and are able to clear a path for other demons by laying waste to defensive encampments and defenders alike.

The ARC has since declared pinkies to be priority targets, and advises its soldiers that they are best eliminated with long range bombardment before they can approach within charging distance.

The pinky was first seen during the QuakeCon 2018 game play reveal, in the Super Gore Nest level. It is seen charging at the player, using the same attack from Doom (2016).