This article is about the weapon in Doom (2016). For other versions of this weapon, see:
"UAC EMG pistol" redirects here. For the multiplayer weapon, see EMG Mark V pistol. 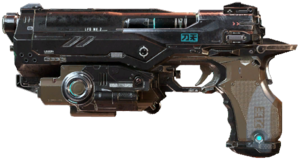 The UAC EMG sidearm, also simply known as the pistol, is a weapon in the 2016 Doom. It is a rough equivalent of the pistol from previous Doom games, but differs from them significantly. It is a small directed energy weapon based on plasma gel - called energy-matter-gel. Four megawatts of Argent energy are compressed into a kinetic slug. The weapon can be upgraded with an advanced capacitor to allow it to be charged for a more powerful shot. It cannot acquire weapon modifications, however. It has an unlimited ammunition supply thanks to a gravitational dynamo which is charged by the wielder's movements. It is a standard issue weapon for all UAC Tier 2 adherents.

The pistol is the weakest weapon in the game and is intended for emergency use as a backup sidearm. It is not of much use beyond taking out possessed, as even imps take too many shots for it to be effective if under combat pressure, such as during an arena battle. It can be used selectively to pick off already seriously wounded enemies, however, particularly ones who are staggering with critical health but in a situation where the player does not have the time or space to perform a glory kill.