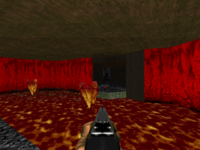 All qualities of a pistol start met in E3M3: Pandemonium.

The term pistol start is used among Doom players to refer to the initial spawn status of the player after beginning a game, or after dying and restarting the current level. As the term implies, in this setup the player has only a pistol and fifty bullets in his possession, in addition to his knuckleduster, and is completely healthy.

It is generally considered important that the player is able to complete a level from a pistol start and with reasonable effort. However, due to the fact that the player is able to keep his supplies when advancing to a new level, it can be tricky for a mapper to balance the difficulty grades between pistol start gameplay and one with preobtained ordnance. Naturally, it is a problem in game entities that consist of more than a single level.

The maps in Doom and Doom II were typically created so that the player could finish them from scratch. When Sandy Petersen was asked about the things he found disappointing in Doom, he said he felt the episodes were too easy because id designers did not properly take account the player's ability to carry ordnance from earlier levels. The gameplay testing was based mainly on pistol starts, separately for each level. According to Sandy Petersen, "Most people started levels with some kind of significant equipment. However, almost all our playtesting was done starting each level with just a pistol. We made the game too easy for the average player."[2]

Arguably, the most striking consequence is seen in E3M8: Dis where the spiderdemon is practically powerless if the player has found a BFG9000 somewhere in the episode. If the player has managed to keep the weapon along with its ammunition and ultimately uses it against the boss monster, the battle will be dealt with ease – one may consider this anticlimactic, given that it is the final endeavor of the game. The intended challenge of the level is experienced only when the player fights the spiderdemon with the weaponry that is provided in the map.

A reprise of the problem is avoided in Doom II as the destruction of the final boss was made more independent of damage and more dependent on accuracy. However, this solution has a similar threat of disappointment as the boss technically ended up being a mere static wall and not a moving thing. As the main opposition in the level is produced by the spawned monsters, the player could be given a considerable arsenal in the beginning of MAP30: Icon of Sin.

Many custom maps are specifically designed to be played from scratch (sometimes even intentionally killing off the player in anticipation), so that the players' initial defenselessness and vulnerability force them to use discretion and evasion tactics while seeking weapons and powerups. This adds a new edge to the gameplay.

The conditions of a pistol start may be modified with a DeHackEd patch that can change the amount of starting health or bullets, such as in STRAIN, or with specialized scripting languages in more advanced source ports.

Some level sets are designed such that each individual map is playable from a pistol start, while others are only balanced for play when the players carry weapons, ammunition, and other supplies over from previous levels. By making use of the ability to save the game, any given level set can be completed this way without being reduced to beginning a map from a pistol start in the event of death.