Pitchfork is a single-level PWAD for Doom II and the TNT: Evilution IWAD. It was originally designed and released in 2015 by Sverre André Kvernmo (Cranium) for the megawad TNT: Revilution, but it was rejected by the project leaders. 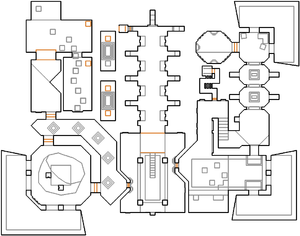 Map of Pitchfork
Letters in italics refer to marked spots on the map. Sector numbers in boldface are secrets which count toward the end-of-level tally.