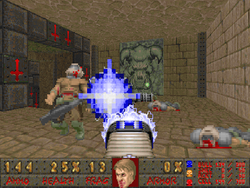 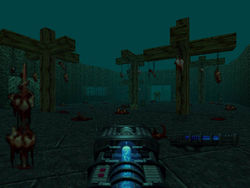 The plasma gun (both first person view and pickup sprite) in Doom 64.

In Doom 64, the plasma gun sprites are completely redrawn. It has a blue electric tube on top, which makes a constant buzzing sound. Like the shotguns, the recoiling animation is non-existent, likely to save cartridge space.

The main difference is that it fires at a slower rate of one projectile every 4 tics. Because the game runs at 30 tics per second instead of 35, this translates to one projectile every 0.133 seconds. If the trigger is released, there is no cooldown pause and the weapon is immediately ready to fire again. The amount of damage the projectiles do is unchanged, but they have a faster travel speed of 40 units per tic. 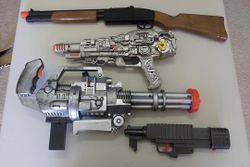