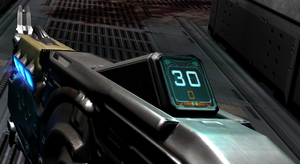 An equipped Plasma gun
This article is about the weapon in Doom 3. For other versions of this weapon, see:

The plasma gun in Doom 3 is an energy-based weapon first found in a hidden location in Alpha Labs 3. This weapons fires pale-blue globular bursts vaguely reminiscent of tiny suns.

"Energy based weapon developed in the Mars weapon facility. Unit is powered by plasma canisters manufactured in the EnPro facility."
― PDA description

The plasma gun is slightly different from its earlier counterpart, as well as the later Doom (2016) version and the Doom Eternal version, as the projectiles now move at visibly slower speeds. Nevertheless, it still possesses effective firepower, making it comparable to the higher-end weapons such as the chaingun and the rocket launcher.

Similarly to BFG9000, chaingun and the newcomer machine gun, the plasma gun discards the game ammo HUD because it has its own ammunition counter in a small monitor located at the rear upper of the weapon itself. Ammunition comes in the form of plasma cells, which appear to be bulky bottles that glow a luminescent blue and possess a blue-colored tip. Stray plasma bottles hold 25 units of projectile, whereas a box of 2 bottles holds double the amount. Ammunition for this weapon are generally easier to locate throughout the entire game relative to rockets, ammo belts, and BFG cells, and are particularly abundant in the EnPro facility.

The plasma gun has a decent damage-per-shot ratio, a good rate of fire, and perfect accuracy. Its primary limitation is the slow speed of the projectiles. The plasma gun should be employed in short to medium range, but its accuracy makes it effective at long range as well, particularly if the enemy is large and/or not moving much. All short-range monsters make easy target practice for the plasma gun, but ammo should be conserved for stronger monsters such as the revenant and Hell knight. The slow speed of the projectiles means that flying monsters such as cacodemons can be very difficult to hit unless at very short range; the hit-scan chaingun is recommended against them.

Because the plasma gun's projectiles are very large and fire with perfect accuracy, it is effective at destroying certain enemy projectiles; plasma can form a solid defense against the revenant and mancubus, but it is generally easier to dodge the slower and non-homing projectiles of the imp, Hell knight, and cyberdemon.

This video disk can be picked up in the Combat Prep room in Mars City.

Capable of sustained firepower due to the latest advancements in plasma injector technology, this weapons' light weight and high yield make it desirable for most combat scenarios.

Always on the forefront of technology, the UAC is making safer worlds through superior firepower.