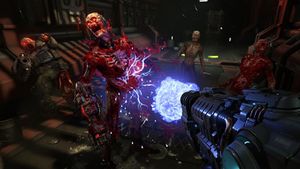 The plasma rifle in use against zombies. 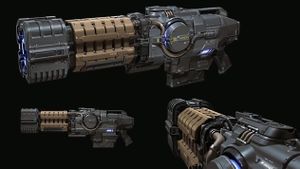 Concept art.
This article is about the weapon in Doom Eternal. For other versions of this weapon, see:

The plasma rifle returns as a weapon in Doom Eternal, with a new design that draws heavily from the original plasma gun. It is first encountered in Exultia, after passing through the trans-dimensional portal. The overall function of the weapon appears to be unchanged from the previous game, firing small bright blue compact orbs of plasma at a rapid rate.

The plasma rifle retains its minor splash damage on impact, and now features a new effect where enemies that are hit by several plasma orbs within a short time will explode in a burst of energy, like the Needler of the Halo series. While helpful against clustered enemies, this effect can be inconvenient if trying to go for a glory kill.

Energy shields like the ones used by the shield soldier and carcass will overload and explode if hit by plasma rifle fire, severely damaging the shield's user and damaging other enemies nearby. It can also disable the Doom hunter's body shield, exposing it to damage. However, it cannot affect the magical shields used by the arch-vile and the marauder.

Heat Blast
The same as Heat Blast from Doom (2016), but now firing in a cone ahead of the gun rather than in a circle centered on the player; as before, it must be charged up by using the plasma rifle's standard fire. It has three levels of charge, designated by the color of the coolant sheath. At least one level of charge must be built up to fire the Heat Blast, with higher levels enhancing the damage of the Heat Blast.

Microwave Beam
Following a short charge-up time, fires a concentrated, short-ranged beam of plasma energy that locks onto and immobilizes an enemy, inflicting constant damage as long as the beam is maintained. Sufficient exposure to the beam will kill the enemy, causing it to explode and deal damage to others nearby. The explosion size is dependent on how large the slain enemy was. A health bar will appear below a monster that is currently being affected by the beam, giving an approximate sense as to how much time is needed to cause a death explosion. The spirit, which first appears in The Ancient Gods, Part One, requires use of the microwave beam mod to be destroyed after it has been separated from its host.

A design by the UAC's military technology division, the plasma rifle is considered the standard for energy-based weaponry. It fires superheated plasma in short bursts.