Plasmaplant is a single level for ZDoom created by Sverre Kvernmo. It was the first map released by Kvernmo since the release of Eternal Doom seventeen years prior. The majority of the map focusses on a visual theme dominated by the colour blue, and heavy lighting contrast. It contains no new music, though the textfile mentions some recommendations, including "Organic Gods" by Mark Klem from Memento Mori II, and even playing with no music at all.

Plasmaplant started out as a map for Kvernmo's Cabal series, where the only weapons available to the player were the pistol and the plasma rifle, but an actual map was never made, remaining as a paper sketch for eighteen years. Mid 2013, Kvernmo began to build a map based on the sketch, preserving the envisioned architecture and main gameplay themes, although the two-weapon concept was dropped. The first beta was released on 31 October, 2013, and the final version was released on 22 December, 2013. Reception of the WAD was generally positive, with many praising the visual style and map design, though the use of stealth monsters was often criticised.

Almost a year following its release, Plasmaplant received one of the 21st Annual Cacowards. 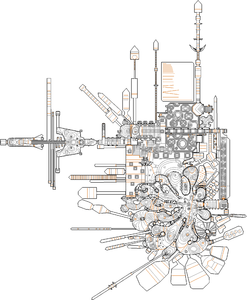 Map of Plasmaplant
Letters in italics refer to marked spots on the map. Sector numbers in boldface are secrets which count toward the end-of-level tally.

* The vertex count without the effect of node building is 35056.