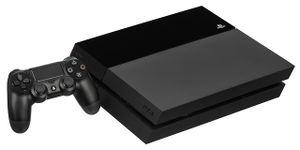 The original PlayStation 4 console with a DualShock 4 controller.

The PlayStation 4 (officially abbreviated as PS4) is an eighth-generation home video game console developed by Sony Interactive Entertainment. Announced as the successor to the PlayStation 3 in February 2013, it was launched on November 15 in North America, November 29 in Europe, South America and Australia, and on February 22, 2014, in Japan. It competes with Microsoft's Xbox One and Nintendo's Wii U and Switch.

The PlayStation 4 has received a release of every main-line Doom title and, through the Doom Classic port's downloadable content features, several expansions as well: