Unlike the PlayStation Doom TC, this modification creates a hacked and modified version of the original game, and runs on the actual PlayStation hardware (along with emulators). The ultimate aim is to have versions of all official maps, along with some custom maps by notable creators, given the PlayStation Doom treatment, while remaining as faithful as possible given various technical limitations and omissions of PlayStation Doom (for example, no arch-viles, as the monster does not exist in PlayStation Doom/Final Doom).

Upon loading the hack, after a few introductory FMVs, the player is presented with a new menu which allows for the player to select a set of levels to load. As of Beta 3, these selections are as follows:

The hack also contains some quality-of-life improvements; for example, restoring a Nightmare! difficulty which is similar to the PC version (except for a lack of respawning monsters), re-enabling a VRAM Viewer cheat code, and some bugfixes related to switches and texture animations.

Betas 1 and 2 contained a level, "New Hangar" by Team GEC, which was removed in future releases. It served as a testing playground for hacking the games. 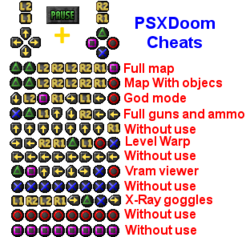 Here is the list of the internal codes of PlayStation Doom.

Cheat codes: PlayStation Doom has an unused cheat code that enables a "VRAM Viewer", which the Williams team used to test the positions of textures and flats loaded in the VRAM when converting maps, and was disabled for the release of the game. In the Master Edition version, this code is reactivated.