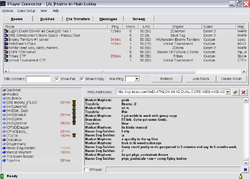 Player Connector was a lobby-based online service for multiplayer matchmaking built upon the Doom Connector 3 source. Although it was visually similar to Doom Connector, there were many major differences. Unlike DC3, there was no single developer, but rather a team of people (Player Connector Staff[dead link]) and one lobby to support all games.

Weekly tournaments and events were held where players obtained points based on their scores. Each player had a running score, and a set icon according to their score. The system also included new services such as Wadbot (a WAD file hosting/retrieval service) and the Quotebot.

Many more games other than Classic Doom were supported, including: