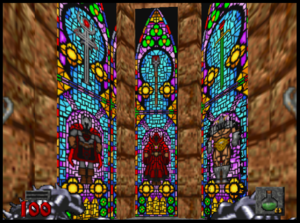 The three playable character classes of Hexen, depicted in stained-glass.

A player class is a set of definitions which apply to the player defining intrinsic properties such as usable weapons, the qualities of armor, effects of items, and basic physical dimensions such as running speed, initial health, view height, and more. Player classes as a gameplay mechanic were introduced into the Doom engine by Raven Software's Hexen, which used it to define the three fantasy trope classes of that game: the Fighter, Cleric, and Mage. A fourth class, the Pig, exists internally, but is only used when a player is struck by the Porkalator. The classes supported by Hexen were entirely hard-coded; it was not possible to add additional classes or modify the properties of the existing classes.