Milo and Dario Casali, who had contributed one and three levels respectively to the Evilution project, accepted the task of creating what became Plutonia after having sent an eight-level WAD of their designs to American McGee, managing to impress him along with the rest of id Software. They created 32 levels for Plutonia in four months' time, and submitted them in January 1996. Unlike their contributions to TNT: Evilution, which were substantially edited after submission (four being rejected altogether due to being too large), these turned out to be the final revisions of the levels. Dario later commented, relieved that no further changes were required, "thank God because I was ready to throw my computer out the window at the time."[1] 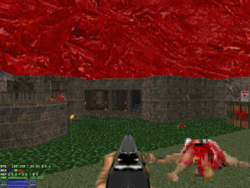