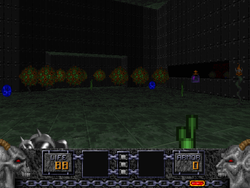 Volatile, organic pods are Heretic's version of the exploding barrel. When destroyed, they explode, dealing splash damage to anything nearby. They can be pushed around. There are also pod spawners, or pod generators in the game engine, which can create an endless supply of pods. If there is free space next to it, a pod spawner will create pods until there is no room adjacent to the spawner. The spawner will then remain inactive until the space is freed again, unless it has reached its maximum of sixteen pods.

In the IWADs the pod is first encountered on these maps per skill level:

The IWADs contain the following numbers of pods per skill level:

In the IWADs the pod generator is first encountered on these maps per skill level:

The IWADs contain the following numbers of pod generators per skill level: