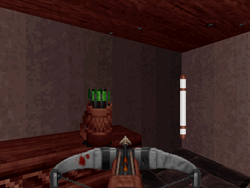 The poison bolt is one of the two types of arrow for Strife's crossbow. This arrow instantly kills all human enemies. However, it is completely useless against other enemies. Unlike the electric bolt, the poison bolt does not trigger the alarm.

A quiver of green arrows contains 10 poison bolts. On Training or Bloodbath, the amount is 20.

A maximum of 25 poison bolts can be carried at once. With the ammo satchel, the amount is 50.

Irale starts to sell poison bolts for 200 gold per 10-shot unit in Tarnhill after the player has killed the Programmer and received Macil's advice about the Oracle.

In old versions of the game, the pickup prompts referred to the bolts as "arrows".

In the IWAD the quiver of poison bolts is first encountered on these maps per skill level:

The IWAD contains the following numbers of quivers of poison bolts per skill level: