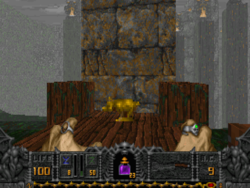 The Porkalator is Hexen's equivalent of Heretic's Morph Ovum. When used, several projectiles are fired in a spread, and any enemies hit by them will be transformed into pigs. It is called porkalator in the game, but porkelator in the game manual.

If the player or a monster gets hit by a Porkalator projectile, they are transformed into a pig. In this state, they have 30% health, which cannot go above that limit, and an armor class of zero. They can use their reduced size in this state to enter passages with low ceilings, which is used to conceal a secret chamber in the Vivarium and also enabled a sequence break in the Castle of Grief that was patched out in version 1.1 of the game.

The Porkalator's effect does not last forever, and eventually players and enemies transformed into pigs will return to normal (except an activated Dark Servant). The advantage for the player is that their health will be restored back to 100% after the effect of the Porkalator wears off. This means that it is possible, though rather risky, to exploit a Porkalator as an emergency healing item, given the presence of an enemy capable of deflecting projectiles and enough space to flee as a pig until returning to normal. Any armor that the player was wearing when transformed will be lost, however.

The game manual states that in normal human society, even speaking of the Porkelator is forbidden.

The Porkalator does not affect the Death wyvern, Heresiarch, Zedek, Traductus, Menelkir, or Korax. However, it is particularly useful against packs of Centaurs and/or Slaughtaurs.

In the IWADs the porkalator is first encountered on these maps per skill level:

The IWADs contain the following numbers of porkalators per skill level: