Port Glacia is a single-level PWAD for Doom II requiring a Boom-compatible source port that was released in April 2018. It was designed by James Collins (an_mutt), uses the music track "Dream of Guilt" by Loki, and also includes title and intermission tracks. It was chosen as a runner-up at the Cacowards 2018 proceedings. 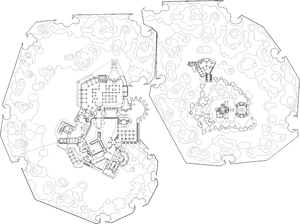 Map of Port Glacia
Letters in italics refer to marked spots on the map. Sector, thing, and linedef numbers in boldface are secrets which count toward the end-of-level tally.

If you somehow get on the ledges east of the large cargo lift at the north end of the starting area, run across them going east to a dark passageway which leads to a teleporter. The teleporter takes you to a single health bonus and a picture.

* The vertex count without the effect of node building is 13006.