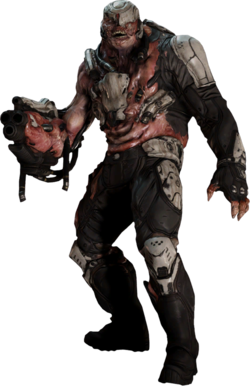 A possessed soldier.
This article is about the monster in Doom (2016). For other games, see:

Possessed soldiers are a more advanced form of the possessed found in Doom (2016). During UAC Lazarus Project experimentation it was found that some subjects would continue to display cognizance post mortem, not becoming mere mindless slaves but driven to act in a warrior role instead. This was found to not be random, but to be driven by some unseen process which selects those with military training and physical prowess, suggesting that some type of genetic coding or intelligence is present in the Lazarus wave particles.

Possessed soldiers, while still inhuman in behavior, are significantly more intelligent and challenging than possessed scientists. They still display a degree of tactical acumen, and battle the player with an automatic plasma gun in combat, fused into their right arm in the fashion of an arm-cannon. They wear flesh-melted UAC combat armor of sorts, giving them increased durability, but can still be killed with a couple shotgun blasts or other weapons. Their plasma guns can either fire in automatic mode, or charge a more powerful shot, which explodes with a blast radius after a short distance. They are the equivalent of the original Doom's zombiemen, or Doom 3's Z-Sec.

According to The Art of DOOM, development names for the possessed soldier included "Hellified Soldier" and "Shotgunner".[1]