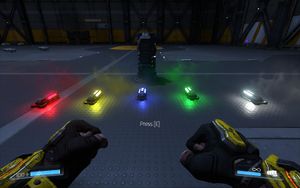 Power cores and a station. 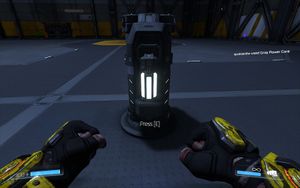 A gray power core inserted into its power station.

A power core is a special collectible item in Doom (2016)'s SnapMap mode. It is similar to the generator power cells found in Doom 3: Resurrection of Evil in that it must be taken from or inserted into a base, in this case known as a power station. There are five colors of power cores—red, yellow, blue, green, and gray—and each must be used with a power station that is configured to belong to the same color of power core.

By attaching the power station's outputs for the "core inserted" and "core removed" events, it is possible to drive logic in the level based on the player's actions with the core. Most commonly, the core will be used as a sort of key to unlock progression through the map.

Power cores themselves have all the same inputs, outputs, and properties as other droppable items, so it is also possible to cause events to trigger when the player collects or drops a core itself without involving the station, and to specify qualities such as what happens if a player carrying the core is killed.