The Praetor suit as it appears in Doom 2016

The Praetor suit is the Doom Slayer's powered combat exoskeleton in Doom (2016) and in Doom Eternal, a powerful suit of armor of mysterious origins which was entombed by the demons of Hell in solid rock in an attempt to keep him from obtaining it if he were ever again to awaken. The UAC found both him and his suit during a special expedition into Hell by Dr. Samuel Hayden and brought the two back to the UAC Mars Base as a contingency against the chance of a demonic invasion. It is heavily modified in the events of Doom Eternal, sporting a wrist blade on the left wrist, along with other features.

The Praetor suit is a formidable device. Aside from basic defensive characteristics which can be augmented through the use of armor, it includes basic life support functions and, with sufficient upgrades, can add increasing protection against certain types of damage such as self-inflicted splash back or damage from exploding barrels. It can be upgraded with the Delta V jump-boots to add a thruster-powered mid-air jump.

The helmet of the Praetor suit has a context sensitive HUD which displays health status, armor, the currently equipped weapon and its ammunition, status of the BFG-9000 and chainsaw, current objectives met within the area, and other relevant information. It also serves as a display for the suit's built-in database, the Codex, which stores any information on enemies, weapons, and lore that the player comes across, and for the automap. This HUD can also highlight items and enemies in real time, showing the types of items in the environment with different glows (blue for health, green for armor, red for ammunition), and revealing when stunned enemies have become vulnerable to a glory kill. Some elements of this highlighting are optional and can be toggled on or off by the player.

The Praetor suit also has an impact compensation system which allows its wearer to suffer large falls without taking falling damage. This capability has its limits, however; fatal fall zones still exist as an element in the game, but these are usually obviously different than simple cliffs or ledges from which the player is able to survive a fall. Very tall areas can also become hazardous once the suit's limits are exceeded; this can happen in the Argent Tower.

The suit is retrofit with collectors for Argent energy in the chest plate and right fist, and the latter of these can be taken advantage of to allow use of Argent cells, which upgrade the marine's basic intrinsic statistics, including health, armor level, and ammunition carrying capacity. 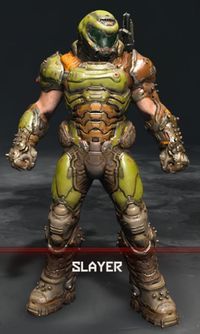 The Praetor suit as it appears in Doom Eternal

In Doom Eternal, the suit is further enhanced with the equipment launcher, a weapon system mounted on the left shoulder that can simultaneously function as the flame belch and as a grenade launcher, with a toggle between frag grenades and the ice bomb. The left gauntlet is fitted with the Doomblade, a retractable blade primarily used to perform glory kills. The impact compensation system from the previous game is retained, but no longer displays a message when activated; it is upgraded to an extent that the Slayer can survive very large falls, with some being higher than the fatal threshold previously observed in the Argent Tower. Perhaps as a result, fatal fall zones also no longer exist in the game - the player will simply continue from a location near where they last stood on solid ground, suffering a loss of health and armor. Basic statistics including maximum health, armor and ammo capacity can be improved with the use of Sentinel crystals, replacing the Argent cells from the previous game. Also, this version of the suit includes exposed elbows and a less opaque visor, revealing a part of the Slayer's face.

Alternate skins for the Praetor suit, including its 2016 appearance and the original Doomguy armor, can be acquired by obtaining Sentinel batteries and by earning event experience (such as through playing matches in Battlemode). The skins are all functionally identical to the regular Praetor suit.

In Doom (2016), the Praetor suit's capabilities can be upgraded with Praetor tokens which can be salvaged from the suits of fallen UAC elite guards. In Doom Eternal, Praetor suit points can be acquired from Night Sentinel spirits or by completing combat challenges found in most levels; they perform an identical function to Praetor tokens.

The Praetor suit is said by the demons to have been forged, or at least upgraded, by a traitor to Hell's cause known only as "the wretch," and their writings claim that the suit was made in Hell itself. Despite this, the suit bears markings in English with Arabic numerals, and seems to have been manufactured by human corporations. This suggested that the actual origin of the suit might have been in another dimension from which the Doom Slayer originally came, eventually finding Argent D'Nur and becoming a leader of the Night Sentinels. The game heavily suggested but never stated with any certainty that this origin could be explained in one of the other games of the Doom series.

In Doom Eternal, it is finally confirmed that the Slayer is the same person as the protagonist of the classic Doom games, and since he regularly upgrades his suit himself, its basic design resembles Night Sentinel armor while being composed of diverse components taken from different locations. The Betrayer is also seen to wear a suit of armor similar to the Praetor suit, as are the marauders.

At some time after the Slayer was trapped in Hell by the Hell priests along with the other elite of the Night Sentinels, the demons managed to separate him from the suit and seal him into a sarcophagus inside an ancient temple which they then collapsed onto him. The suit was itself then sealed into the solid rock where it was later found by the UAC.

Relationship to the original marine armor[edit]

In a flashback in Doom Eternal, which shows the Doom marine being presented to the priests of the Order of the Deag, one of the priests holds the classic marine helmet while Sentinel soldiers explain that he was found outside the walls of Sentinel Prime, badly wounded and exhausted. Furthermore, the entire suit to which the helmet belongs can be found on the Fortress of Doom and is unlocked as a usable skin via a Sentinel battery.

It was not initially possible to use the Praetor suit in Doom (2016)'s multiplayer modes, nor when playing SnapMap levels. These capabilities were added to the game in update 5, however. In the case of multiplayer, a player must attain Echelon 11 rank (the highest ranking) in order to unlock the Praetor suit for use in online matches.

During the E3 2015 Bethesda presentation the Slayer's helmet had an "F90" designation. In the final release of the game, this writing is replaced with a rune-like symbol later identified as the "Slayer's Mark".

In Super Smash Brothers Ultimate, the Mii Gunner has a DLC skin based on the Doom Slayer. The armor is based on the Doom Eternal version of the Praetor suit complete with shoulder cannon, with some moderate sizing tweaks for the super-deformed look Mii Fighters exhibit. Due to the game engine differences, no attacks actually use the shoulder cannon, rendering it merely decorative. The helmet, equipped separately, is also based on the Eternal design.

When fully clad in helmet and armor, the Mii Fighter is completely visually identical to the Slayer, except rendered sideways in a pseudo-2D format, though the model is based on a 3D render like all other Smash characters.

The default gun changes with this armor equipped, using the EMG pistol model while still using the attacks selected for the Mii Gunner available in the game engine.