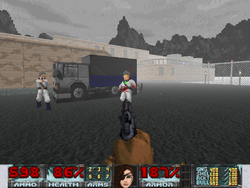 Project Einherjar is a five-episode total conversion for GZDoom/Doom II developed and released by Mike MacDee (Impie) in the summer of 2016; Episode 2 was later released in the winter of 2016; and Episodes 3 through 5 throughout early 2017. It is set during nuclear winter, and features 35 new maps and a totally replaced roster of weapons and enemies in the style of an early-90s 3D shooter. Impie made the mod as a promotional gimmick for a dystopian novel series set in the same universe. The gameplay involves lots of fast, brutal shootouts with enemies that die relatively easily, but can badly injure the careless player. Each episode features a short story that sets the stage for the action to follow, written in the novel's pulpy style.

The player takes control of the novel's protagonist, Juno, in the postnuclear nation of Midgard, which stores its male population like cattle in "Valhalla" facilities. Under direct orders from the government, Juno has begrudgingly rounded up all known homosexual males in her Valhalla and delivered them personally to Gaulheim, to be experimented on by the homophobic Dr. Gaul. Juno is about to leave when a runaway male explains that Gaul is turning the men into mindless super-soldiers as part of a coup to take over the government. Juno reports this to her superior in the capital city, but Dr. Gaul is too well connected to move against officially. Instead, Juno is given permission to discreetly liquidate Dr. Gaul and her super-soldier program, Project Einherjar, while a blizzard cuts Gaulheim off from the rest of civilization.

One distinguishing feature of the mod is that each enemy type has a unique personality to distinguish it from the rest of the cast. It can almost be summarized as a gender-swapped Wolfenstein 3D; the boss characters even have large, distorted anatomy much like the bosses of Wolf3D and Spear of Destiny.