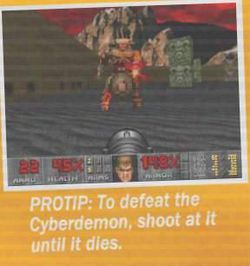 The protip meme is an image created by Doomworld founder and long-time community member Andrew Stine (Linguica) on March 7, 2004.[1] It consists of a screenshot of the cyberdemon in E2M8: Tower of Babel taken in ZDoom, with the caption "PROTIP: To defeat the Cyberdemon, shoot at it until it dies." It is overlaid with a transparent layer of banded noise in order to appear as though it was scanned from a print medium. This image is notable for attaining ascended meme status via its inclusion in the 2016 Doom as the name of an achievement, "Shoot it Until it Dies". A mimicked version of this picture can be seen on a loading screen in Doom Eternal if the player gets killed by a Tyrant. The image is meant as a parody of late 1990s and early 2000s gaming print journalism and the tendency to include filler material in walkthroughs and game reviews which bordered on totally obvious or completely useless. It is in particular a reference to a regular feature of GamePro magazine, which included the usually much more informational "PROTIP" in the margins of most of its strategy articles.

It has, over time, grown to encompass a secondary meaning in representing the simplicity of classic Doom game play and the qualities of the early first-person shooter genre in general, in contrast to slower, cinematic, story-laden modern shooters.

Initially released within the Doom community, the image spread gradually over time without any information on its context. It has become a prime example of the phenomenon of false history as it has been repeatedly alleged to be an actual GamePro scan, though never with a citation to any particular issue. This is made difficult to prove in retrospect by the fact that almost no archives of such publications exist, either in print or electronically. The only "tell" in the image itself are the scorch marks left on the walls by the cyberdemon's rockets, a feature of the ZDoom source port which was not part of any official version of Doom, and did not exist at the time that GamePro was in active circulation.

As the image spread, it inspired many similar images with equally pointless advice, usually replacing the screenshot portion of the image with something else, and it became an early example of an image macro and Internet meme.

The meme makes an official appearance in the achievement of defeating the cyberdemon in the 2016 Doom. In Doom Eternal, the meme is once again referenced in the loading screen tips for the tyrant.