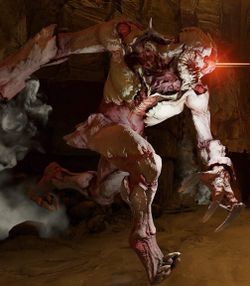 The earliest known version of the prowler occurs in footage of glory kill concept testing being performed in a map from Doom 4 1.0 during the "rolling reboot" process of development between that game's cancellation and the formation of the final concept for the 2016 Doom release. At this point the monster is stylistically much simpler, with less texture and detail, but features intact in its final form include a bifurcated jaw, multiple eyes, talon-like claws, a row of protruding bones along its spine, and a thin, smooth abdomen.

The prowler was first found by data miners during the closed multiplayer beta for Doom (2016). At this point, the monster's final form was complete, but its model was untextured. It is unknown if the texture map was simply not included in the resource bake for the open beta, or if it was in fact not yet finished.