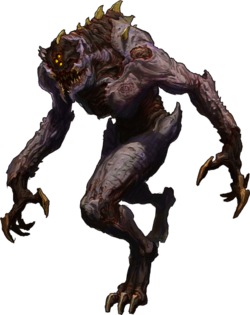 Concept art of the prowler created for Doom (2016).
This article is about the monster in Doom Eternal. For other games, see:

The prowler returns as a monster in Doom Eternal, now as a single-player campaign demon. As before, it is a humanoid demon of similar stature to the imp, but is larger with purple skin, long claws, and a number of bony plates projecting from its back. Similar to the Doom 3 imp, it has a spider-like cluster of three eyes in the center of its face. It has a tripartite jaw, with the lower mandible being split in half. A more advanced variant also occurs in The Ancient Gods, Part Two in the form of the cursed prowler.

The prowler employs a stealthy approach, teleporting behind or beside the player before leaping forward for a melee attack, which deals considerable damage and is performed rapidly; if it perceives itself to be in danger, it will teleport to safety and try to set up another surprise attack. It may also fire fast purple energy blasts as it charges if there is enough distance between it and the player. Unlike its previous appearance, it has a fairly large amount of health.

The prowler's preference for ambush maneuvers makes it especially dangerous if it appears among a group of other monsters, as they may keep the player distracted and unable to notice the prowler's presence until it is ready to strike. Ice bombs should be used to keep it locked in place, preventing it from teleporting away.

Thought to be a distant cousin of the imp, the prowler's vision is keen enough to see in total darkness. Among the Night Sentinels, it was known as the "Nightstalker".

The design of the prowler may be influenced by that of the nightmare imp from Doom 64, keeping its purple aura and projectiles, while gaining the ability to teleport.