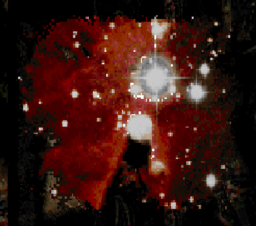 A pulsar at its largest size

Pulsars are hazards found in Hacx. They are initially introduced in the first cyberspace level of the game, MAP05: Cyber Circus. They resemble an odd, pulsating mass, which will deal blast radius damage around themselves as they reach their largest size, before shrinking back down and beginning the cycle again. They cannot be destroyed, only avoided, but may occasionally prove useful in damaging and killing monsters.