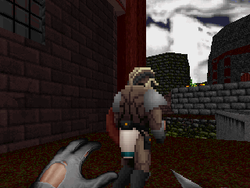 The punch dagger at rest. 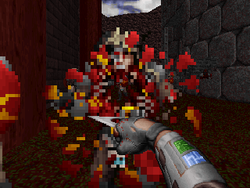 The punch dagger is the first and basic weapon of Strife, and the player's starting weapon. The sprites for the dagger are based on the punch sprites from Doom and Doom II, though mirrored horizontally. At the beginning of the game, the dagger is only useful until better weapons such as the crossbow and assault rifle are obtained. However, the stamina stat which affects the player's health cap will also make the dagger stronger with each upgrade received. It is extremely useful against acolytes, especially with the stamina upgrades, as it gradually becomes possible to gib an acolyte in one punch. It is also an effective attack against stalkers and sentinels, which can eventually be taken out in a single punch as well.

The primary benefit of the dagger is its high stealth factor. A noiseless weapon, most enemies will not react to its use unless directly injured by it. However, acolytes and templars will react if they see the player punch someone, whether enemy or NPC, who is standing in the same sector, so this must be kept in mind if multiple guards are stationed close together.

Strife: Veteran Edition added three talismans to the game hidden in different locations. Collecting all of them will significantly increase the damage dealt by the dagger, to the point where it can kill an inquisitor in one blow.