Putrefier is a single-level PK3 for Doom II using the GZDoom source port. It was authored by Edward Cripps (Ed) and uses his own music cover of the theme from Zombi 2.

Putrefier was granted one of the 19th Annual Cacowards in 2012, and was featured in Doomworld's Top 100 Most Memorable Maps, placing 43rd. 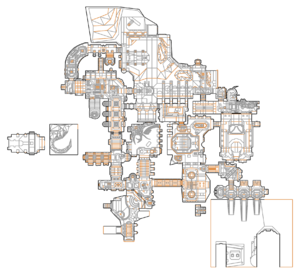 Map of Putrefier
Letters in italics refer to marked spots on the map. Sector, thing, and linedef numbers in boldface are secrets which count toward the end-of-level tally.