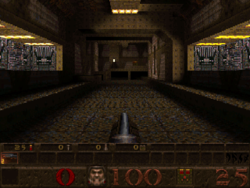 Quake was the next major game to be released by id Software after the success of Doom. The first release was on June 22, 1996. Like Doom, it was a first person shooter and was clearly influenced by Doom in its style of gameplay, design, and story. For example, Quake features a similar arsenal of weapons as well as teleporters.

Influence of Doom on Quake[edit]

The first Quake was built around its engine with no strong story point. The concept for the game itself was divided between roughly three camps: those (notably John Carmack) who wanted a fast-paced futuristic theme, with no supernatural elements for a change; those (notably Adrian Carmack) who wanted a Lovecraftian occult theme; and those (notably John Romero) who wanted a gothic fantasy game centered in melee combat. In the end, Quake went far in none of these directions and instead blended elements of all, resulting in a mix very similar to Doom's own theme: beginning in high-tech maps and moving on to gothic fantasy levels to battle Lovecraftian monsters. The scenario is practically a direct calque of Doom's: once again, the military-industrial complex devised teleportation devices (called "slipgates") which actually pass through a dimension full of hostile monsters who seize this opportunity to invade and must be thwarted, by the sole surviving soldier stationed at the facility. The Quake HUD's layout is likewise closely modeled on the Doom HUD (which itself is not much different from the Wolfenstein 3D HUD).

Many weapons in Quake are similar to Doom's: the shotgun, super shotgun and rocket launcher are directly taken from it.

As demonstrated in some Quake alpha screenshots, during the development, some Doom maps were redone for Quake for internal use. [1]

Influence of Quake on Doom[edit]

Quake had a strong impact on the Doom community. The textures from Quake, or textures designed to mimic the Quake style are used in many popular mods (for example, the Torment and Torture series) and Quake-like elements (such as a console or a particle system) have been adopted by many source ports. After the Quake code was open sourced, some ports (most notably Vavoom) borrowed from it.

Capture the Flag, one of the most popular multiplayer mods for Quake, was later adopted by Doom sourceports like CTFDoom, Skulltag, ZDaemon and Odamex.

In Doom 3, one of the PDAs you get contains a message from the owner's nephew, thanking him for the "Quake 43" game he got for his birthday.

The 2016 reboot of Doom features the quad damage powerup, which functions the same and makes the same sound effect upon pick-up.

The development of Quake was troubled due to creative differences between different factions of the team, as well as tension between the artistic and technical sides of development as the engine required so much time to stabilize. As of the game's release, these problems boiled over, resulting in the resignation of John Romero at request of the majority of the owners led by John Carmack, in the same way that Tom Hall had earlier been dismissed during Doom's development. Programmer Dave Taylor departed during development.[1]:171 CEO Jay Wilbur, map designer Sandy Petersen,[2] and mapper Shawn Green would also depart within a year of its release, leaving the team that created the most popular and impactful of id Software's releases to date broken up.[1]:182